One of my strongest childhood summer memories, besides making bicycle trips to the Frozen Custard for ice cream, is going to the county fair.   My aunt’s house butted up next to the fairgrounds so we always had the best parking spot and it felt like we spent the whole week there.  Not only did the fair have the animals barns and the homemaker exhibits but there was always tons of food, carnival rides, and games.   It was one of my favorite places to go in the summer and something I always looked forward too.  I’m sure I’m idolizing it as we do with a lot of things in our past (say your favorite song “Mmmmbop” by Hanson or TV show “Full House”) and how watching them now they just don’t quite add up to our memories but I want my kids to have similar memories so I saw that the county fair was happening last weekend, we packed up and the kids and went.

Given that we live fairly close to the Indianapolis, where the Indiana State Fair takes place, the local fairs around here aren’t as big as they were in Lafayette but honestly, that’s what we enjoy about it.  This past weekend, Hamilton County Fair went on from Friday – Monday and we were able to visit it on Sunday in the afternoon and had a great time.

First, we visited the trackers (James is a 3-year-old boy, enough said)

After that, we hit up the animal barns.  These were always my favorite when I was little. I was always  daydreaming about what it would be like to own these animals.

It has been a while since I visited a local country fair and was surprised to see that there was a Llama barn now.  I guess llamas are pretty expensive to raise and need to have access to A/C but they are growing in popularity so cue the llama barn.

While we were walking through the homemaker exhibits Wes and I started talking about the future and what we want for our kids to do.  I told him that when it comes to 4H, it’s easy to get wrapped in all the animals and to think that it’s just that.  But there is whole other side to 4H and I think it has something for every kid and every interest, not just farmers.  I didn’t take that many pictures of the homemaker exhibits but there were woodworking, fashion, painting, and even gift wrapping.  Not to leave out all the food/dessert/cake decoring areas too.   I can’t wait until James and Norah are old enough to enter 4H and to see what they will be drawn to do. 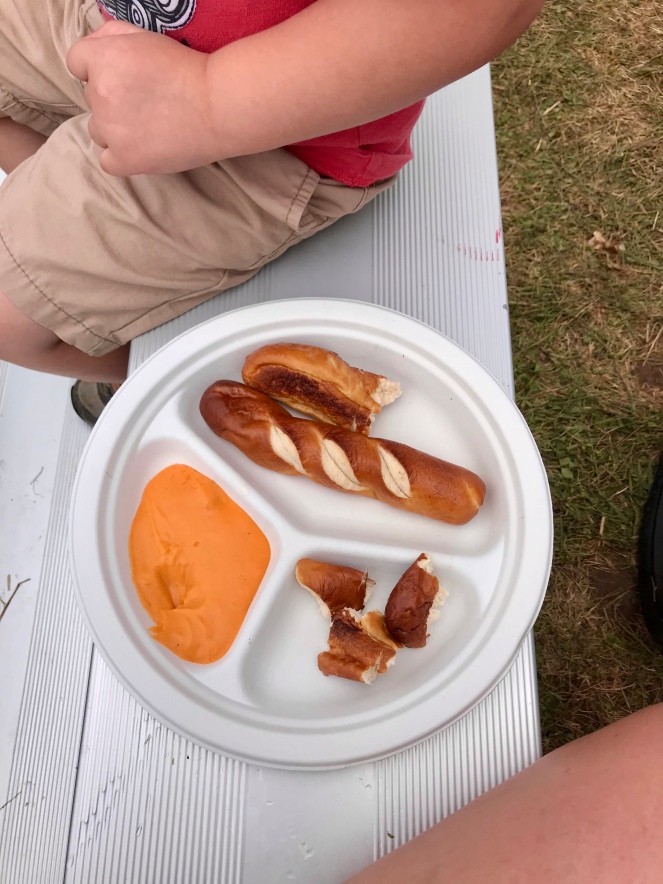 Next, we hit up the food.  Since I’m still doing the whole 30 food challenge, I didn’t get anything but the kids shared some pretzels, Wes had a pork tenderloin (it’s an Indiana thing) then all three of them shared some ice cream.  The best part about the food is that we got all that for under $10.  In a normal situation, that wouldn’t be a deal but in a fair situation, it’s a steal. And definitely won’t be that cheap when we hit up the Indiana state fair.

Our second to last stop (we hit up the trackers on our way out because once again James is a 3-year-old boy who loves trackers) we headed to the horse barn.   I think this was Norah’s favorite stop.  Because of how the stalls were set up, I held her so she could see the horse and when they would swing their heads over to her, she would get the biggest smile on her face.  She is also loving peek-a-boo so when a horse played a little round with her, she let out a sweet little giggle and smile.

After a few more minutes testing out the tractors, we pilled back into the van and headed home.  Which was just in time for a storm to roll in.

This Sunday will probably go down as one of my favorite family things that we have done in a while.  I’m glad that we got to spend Sunday together and instead of just hanging out at home watching TV we decided to get out and do something.  So I would highly highly recommend checking out your local county fair, who knows what type of day it might lead to.

What summer activity do you remember from your summer as a kid?

What is your favorite summer activity you have done this year?