I hope you had a great week and ready for the last weekend of summer.  Over here in the Henry household, it has been a rather crazy week.   J started preschool this week, I had two evening meetings and Wes worked a ‘M-W-F’ at the station.  This week has gone by super fast and also super slow at the same time.  I’m sure you mamas out there can totally relate.

I haven’t been able to post as often as I would like.  I wrote a post the other day about meal trains and I didn’t like how it sounded.  I felt like I didn’t have my voice and was boring to read. So I’m still going to post it but need to rewrite it and make it more interesting so stay tuned for that.   My new goal for this blog is to post every Tuesday and Saturday.  I want to get where I am posting more but right now, in this season of life, two posts a week is what I can do.

This week has been a tough one for me to get much done.  N hasn’t been sleeping during J’s nap time like I would like her too/ she used to do.  I usually only can get about 30 minutes of them both asleep at the same time and it’s barely enough time for me to get the camper stuff done let alone write/ work on a blog post.  Sometimes I can get N back to sleep if I hold her and since it’s hard to type with only one hand, I usually end up taking a nap or doing something other than blogging.

I had two meetings this week that were related to my MOPS group – one for the prayer team I’m on and the other for my MOPS table.  I had a great time both nights – it’s always nice to get out of the house and actually talk to other moms or even adults after being at home with a toddler and a newborn all day.

My plan was to do a little blogging in the evening but with the evening meetings and N decided to not go to sleep before 11:30 the past two nights, there hasn’t been much time to get things done.

And if the week hasn’t felt long enough, J got a cold after only going to school twice!    So last night he was up and down all night because he was having a hard time breathing.  Luckily Wes was home last night so towards the end of the night or early morning, depending on how you look at it,  I passed off the J torch to him.  I try to let him sleep during the night when I can, especially when he has to work at the station the next day, but I was so tired that I need some help/sleep.  I have probably only gotten about 4-5 hours of sleep the past two nights with maybe a small nap during the day and it’s really starting to wear on me.  I even sent up a prayer this morning for some extra patience today because I knew I was going to need it and I certainly have needed.  Sadly, it still wasn’t enough.  This morning I was trying to get N to sleep and hopefully take a nap in her crib and when I went to put her in it, J followed me in and wouldn’t leave her room.  After asking him many times to leave, I ended up having to remove him and he cried, N woke up and I lost it.  I yelled and put him in his crib because I just needed a few minutes. Me trying to practice patience and trying to set a good tone for the household as gone out the window today, it makes me sad and I wish it wasn’t that way but I just feel like I’m all done for today and it’s only the afternoon.

As I mentioned,  Wes is working a “M-W-F” and what I mean by that is that he is working Monday, Wednesday, and Friday at the station and he’ll work Tuesday and Thursday at the shop so he didn’t get home on those days till 6:30ish.  On one hand, it does mean that we will have two weekends in a row where he doesn’t have to work but on the other hand, it leads to a very long week because there aren’t two days in a row during the week where he is home.  When we first got married, Wes always complained about the ‘M-W-F’  work week and how it made the week seem so long and now I finally understand.

Do you ever get to the point of where you need more than just a few minutes to yourself? I’m totally there today; I need a break, some time to myself, some time to actually get some stuff done, some time to just breathe.  But I can’t tell Wes this because I’ve already had to two nights off this week.  On Sunday we are going to a family cook out and either it’s going to help (take me off of main baby watch duty) or make it worse because of short naps and just the fun stuff that goes along with traveling and family.

I’m sorry if this is coming off as a big rant, this week has just been tough.  I do have some positive things that happened this week.

J started Preschool and from what I can gather he has had fun and it’s going pretty well.  Since he’s speech delayed all I can really get out of him is a ‘Yeah’ if I asked him if he had fun and so I have to rely on more of his behavior than words.  Since he willingly went back on Thursday, he must have had a good time on Tuesday.  He was a little more eager to leave on Thursday than Tuesday but I think that since Tuesday was a short day (1 hour) he wasn’t done playing but on Thursday (after 2 hours) he was had gotten his feel of the toys.  He seems to be a little more into coloring since Tuesday, getting out his crayon and colored pencils, so he must have enjoyed that part of preschool. 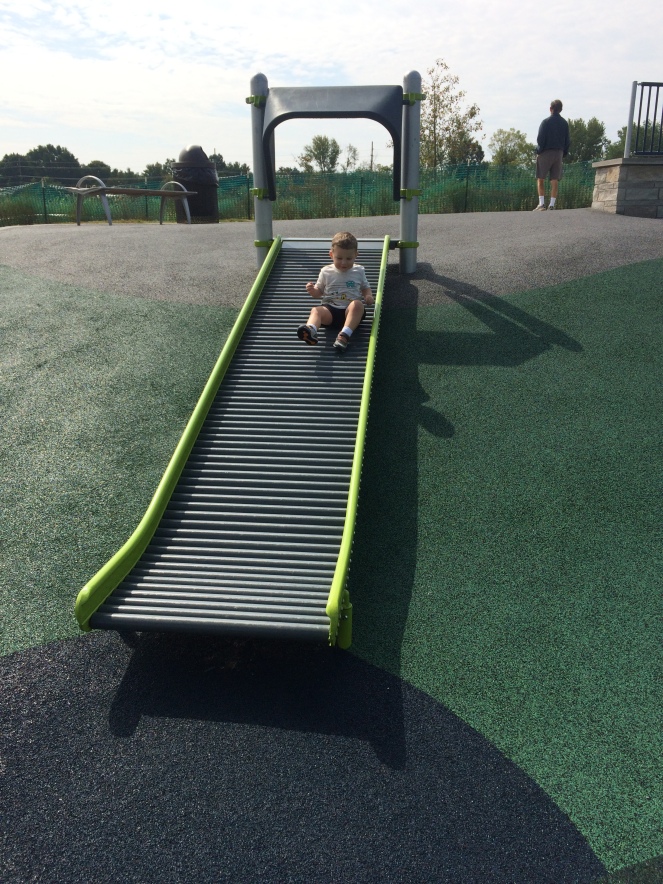 Because the weather has been a little cooler, we have been able to get out and play outside a little more which has been nice and burns off a good amount of energy.  We also were able to make it to a Gymboree Class and saw a lot of our friends that we haven’t seen for a few months.  J has been during Gymboree for over a year now but with N and J going to school we are going to take a little break and see if we can find a class that fits into our schedule better.

On a positive personal side, I have been doing pretty good with my workout lately, I got in 3 this week. I will post more about it later but I have started during Jillian Michael 30 day shred.  This is my go-to get back in shape DVD.  I have done it so many times that I can probably do the first level in my sleep, which sometimes I feel like I am.  On school days,  the only time that I can get it in is in the morning before the kids get up.  It’s nice having that quiet time in the morning but it just leads to early days.

Right now, today, I am in a dark place, not a scary, I need to get medical attention, dark place.  Just it’s been a long week and I don’t want to be in little kid land anymore and would like to be able to get something done.  I know after a good night sleep and maybe even a early night to myself  I will be recharged and ready for tomorrow.  And when I look back at this week, I will see all the fun we had and the memories that we made but for now, I’m just counting down the hours until bedtime.

Update:  The stars seem to line up and both kids went down early last night and I got 2 – 3 glorious hours of quietness to myself.  If you are wondering I used those hours to take a 8 pm nap, clean the kitchen, pick up around the house and work on my monthly budget.  It was exactly what I needed to recharge and I feel so much better today.

Thanks for stopping by and I hope you have a great weekend.